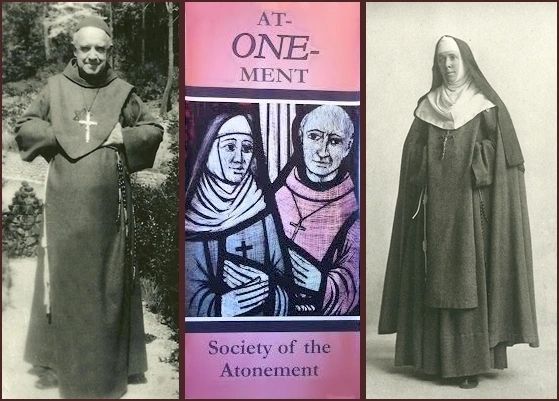 History of the Society of the Atonement

In the Spring of 1897, a letter arrived on the desk of the Reverend Louis T. Wattson (later Father Paul) in Omaha NB. It came from a certain Miss Lurana White, a novice of the Episcopal Sisters of the Holy Child Jesus in Albany, New York. In her letter, Miss White described her frustrating search for a religious community whose members publicly professed the vow of poverty and lived according to the Franciscan tradition.

Lurana White asked Wattson’s help in her search. Knowing of no such community, Father Wattson wrote Miss White about his own long-standing hope of founding the Society of the Atonement, thus began a long correspondence between them. Letter after letter, they continued discussing the possibility of beginning the new Society and doing so together. Finally, they agreed that their individual dreams were most compatible and that they should begin the Society of the Atonement as soon as possible. They also decided that their community should adopt the Franciscan tradition and be dedicated to the goal of promoting Christian unity and mission.

In October 1898, Lewis Wattson and Lurana White met face-to-face for the first time at the White family home in Warwick, New York. There, Lewis and Lurana made a “covenant” with God and with one another, a formal agreement to found the society of the Atonement. But where to begin? Lurana suggested a spot across the Hudson River near the hamlet of Garrison, New York it was called Graymoor. Father Wattson went there immediately to visit and was encouraged by what he saw - a tiny chapel and an old farmhouse standing in the midst of a “howling wilderness,” as some then called Graymoor. Howling wilderness or not, Lurana White decided to leave her comfortable home in Warwick and spend the winter of 1898 at Graymoor in the rustic farmhouse which was near the chapel of St. John’s -in-the-Wilderness. Later the following year, Father Wattson also went to Graymoor where he lived in an old paint shack which he called his “ Palace of Lady Poverty,” the experiment with tradition had begun in earnest.

Now that the Society had been founded, Father Wattson and Sister White strove to translate their ideals into action. In the early years, their special aim was to convince Anglicans that they should unite with the Roman Catholic Church. Naturally, their message was not very popular among Episcopalians and other members of the Anglican Communion. Despite fierce opposition, however, the two founders courageously continued to proclaim the goal of Christian unity for the sake of Christian mission. Father Wattson, who had taken the religious name “Paul,” soon discovered that very few pulpits of the Episcopal Church were open to him. The Society’s benefactors ceased sending donations, and Sister Lurana had to travel to New York City with some of the other sisters to beg funds at subway turnstiles. Though life at Graymoor was difficult in those early years, the two founders persevered nevertheless. They were certain that real happiness lay not in success or wealth or popularity, but in doing God’s will by imitating Jesus Christ the Reconciler and by following the path of Francis of Assisi, the Little Poor Man. Such was their commitment as Franciscan Friars and Sisters of the Atonement.

By 1907, the Wattson-White experiment with tradition was moving toward a crisis. In that year, the General Convention of the Episcopal Church approved a resolution that allowed ministers of other Christian churches to preach from Episcopal pulpits if the local bishop approved. Father Paul and Sister Lurana could not accept that decision. For years they had been appealing for Anglican reunion with Rome, provided the distinctive character of Anglicanism in liturgy, law, and lifestyle could be maintained after unity had been achieved. Now, it seemed to them that the distinctiveness of Anglicanism was being threatened by the General Convention’s decision to allow ministers belonging to other churches to preach from the pulpits of the Episcopal Church. The experiment had indeed reached a boiling-point.

After nearly two years filled with anguish and spiritual torment, Father Paul and Sister Lurana decided that they and their companions should leave the Episcopal Church and become Roman Catholic. Only a person who has made a decision of similar magnitude can really appreciate both the agony and the relief which the two founders must have experienced as they were forced to re-cast their experiment and begin it once again, this time in the Roman Catholic Church. Late in October 1909, Father Paul, Sister Lurana, and a few companions were received into the Roman Catholic Church by Monsignor Joseph Conroy, a friend from Ogdensburg, New York, and later the third bishop of the diocese. For the first time since the days of the Reformation the members of an entire religious community had become Roman Catholics on a corporate rather than individual basis.

As Roman Catholics, Father Paul and Mother Lurana continued their bold experiment. Two religious communities, one of friars and one of sisters, now constituted the Society of the Atonement. At first, the two founders were no more popular than they had been in the Episcopal Church. Many Roman Catholics thought that the friars and sisters at Graymoor were still “secret Protestants.” It took many years to overcome that reputation, but the experiment went on all the same.

Many of the projects which had already been begun in the Episcopal Church were expanded under Roman Catholic auspices. The Lamp, a magazine devoted to Christian unity and mission, was published monthly for a much wider audience. The Union-That-Nothing-Be Lost, an organization which aided missionaries, grew larger and more enthusiastic.

St. Christopher’s Inn, an expression of the Society’s commitment to Franciscan ideals, continued to receive thousands of homeless, needy men each year, providing them with hospitality in the spirit of St. Francis. Among Roman Catholics, the Church Unity Octave, later known as the Week of Prayer for Christian Unity, was vigorously promoted every year from January 18 to 25. As the originator of the Church Unity Octave, Father Paul was concerned that ordinary Christians should understand Christian unity as a realistic goal for the churches, not some vague, impossible dream for which they had the option of praying or not.

Meanwhile, the Sisters of the Atonement were growing impressively in numbers. Roman Catholic men and women were attracted by the founders’ vision of Christian unity for the sake of Christian mission. Soon they had spread far and wide outside the United States to Canada, Italy, Ireland, Japan and Brazil. By 1935 when Mother Lurana died, the Society of the Atonement was firmly established within the Roman Catholic Church. Five years later in 1940; Father Paul’s earthly career ended. Although he did not live to see his dream of Christian unity fully achieved, he and Mother Lurana had experimented well with tradition, having sown the seed for a rich harvest in the future.

Today, the Franciscan Sisters of the Atonement are engaged in diverse ministries on behalf of Christian unity and mission throughout the world. Faithful to the ecumenical and missionary vision of their foundress, Mother Lurana, who wanted her Sisters “to have many foundations, small and poor, but rich in charity toward God, one another and the souls of men” the Franciscan Sisters of the Atonement today have spread throughout the United States, as well as to Canada, Italy, Japan, the Philippines and Brazil.

We are involved in religious education, social welfare, community development programs, pastoral, hospital and prison ministries, home visitation, adult day care, child day care and kindergartens, youth ministry, justice and peace work and guest and retreat house ministries. The Franciscan Sisters of the Atonement are continuing to pursue their founders’ experiment with tradition in order“that all may be one, that the world may believe”(John 17:21). They truly know that real joy is found in the 'atonement' of Jesus Christ and in the ideals of St. Francis of Assisi as those were exemplified in the lives of their founders, Father Paul Wattson and Mother Lurana White. With them, they can boldly proclaim the scriptural words: "We joy in God, through our Lord Jesus Christ by whom we have now received the Atonement." (Romans 5:11)

To learn more about the Franciscan Friars of the Atonement, please visit https://www.atonementfriars.org/