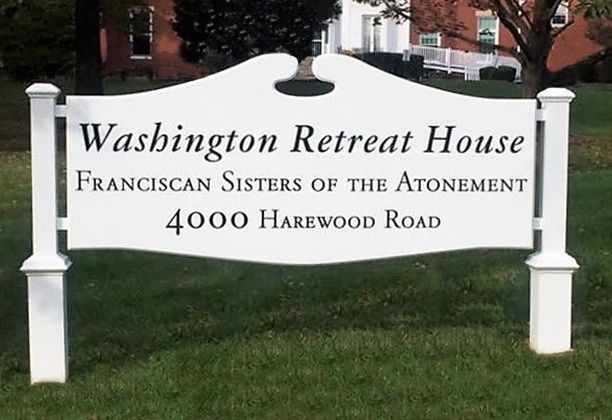 Our Foundress, Mother Lurana Mary White (1870 – 1935) was directly responsible for the establishment of the Washington Retreat House. From her writings we read, “Retreat work has been a desire of mine from the beginning. It is with this thought in view that we are to build a retreat house where women can get away for a little space from the world to find refreshment for the soul and rest for the body, by leaving their busy lives to seek God in peace and in prayer …. Even if the retreat house were to be instrumental in saving but one soul, it would be well worth all our time and labor and expense.”

Thus, this was the inspiration behind Mother Lurana’s wish to establish the Washington Retreat House.  Then, in 1925, Father Paul Wattson, SA, deeded five acres of property to the Sisters for the purpose of building the retreat house.  At that time, aware that retreat houses for men existed in the area of the Nation’s Capital, Mother Lurana was determined to establish one for women.

Permissions to build in Washington, D.C. did not come easily, but Lurana was one to risk, and so she pursued the desire for retreat ministry with great zeal.

On October 28, 1930, just a little over a year after the groundbreaking, the Washington Retreat House opened its doors for the first time. Although its primary thrust was the spiritual development of women (a direction vigorously supported and sustained by the still existent Women’s Retreat League), the Washington Retreat House was, from the beginning, used by various clergy, religious & lay associations, as well as social justice organizations.

Despite sometimes very limited resources, the physical development of the original building was transformed in 1953 when “Our Lady’s Floor” was created and completed.  This area of the retreat house includes the beautiful Southern Colonial style chapel and a second-floor with 12 bedrooms and bathroom/shower area for those rooms.

Ten years later, “St. Joseph’s Wing” was built with second- and third-floor bedrooms (20 on each floor, totally 40-individual bedrooms and 20 baths); the first floor includes a large lounge (often used as a meeting or social room), and a large dining room which holds up to 100 people.  In 1988, the top floor of the convent wing, known as the “Mother Lurana Wing,” was renovated for the use of the Sisters.

Rooted in the spirit of Franciscan hospitality, simplicity and Gospel values, the Washington Retreat House welcomes people of all faith traditions and those promoting the common good through their outreach.  The Retreat House community offers an environment of peace and quiet for all who come here for personal, communal or organization reflection, study or spiritual renewal.  Through our shared life of at-one-ment, we are dedicated to support and encourage everyone who comes to the Retreat House to live a life of compassion, justice and true service.

Our beautiful retreat house is nestled between the Saint John Paul II National Shrine and the Ukrainian Catholic National Shrine of the Holy Family.  The Little Sisters of the Poor Jeanne Jugan Residence is located behind our property, while the Catholic University of American, across the street, and the Basilica of the National Shrine of the Immaculate Conception are within walking distance to the Washington Retreat House.

Truly, we are a blessed and holy respite for prayer and spirituality.  Located in the North-East Washington, DC, our property invites people to, ‘Come, rest a while,’ or perhaps go for a serene stroll amidst shady trees and green lawn. It is inviting for those who wish to come to be spiritually refreshed, renewed or reconciled with God.

Franciscan Sisters of the Atonement